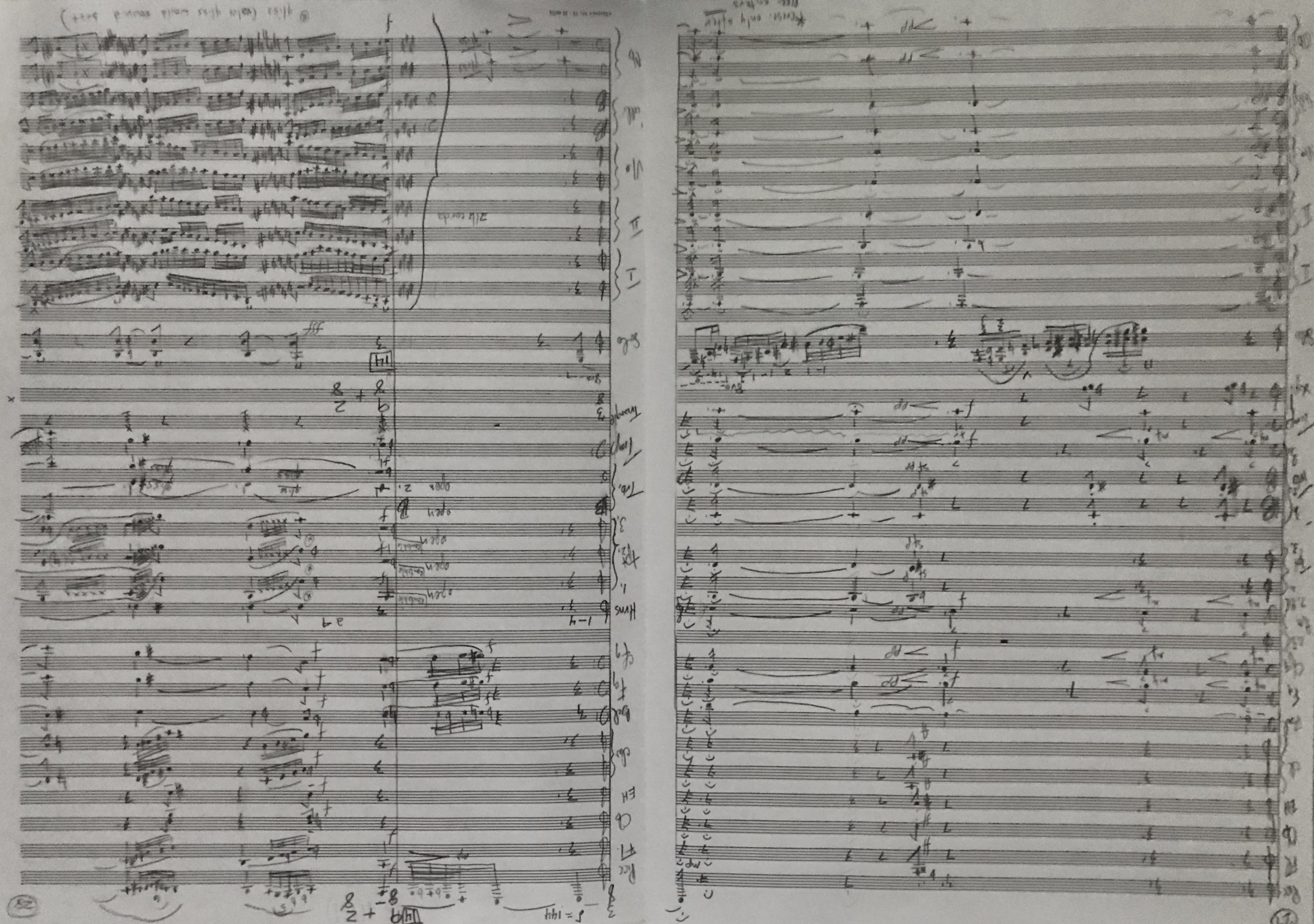 The Trilogy – Music for Violin, Violoncello and Flute

This work might very well have been subtitled “Dreamscapes”. We all carry within us a vision of beauty, an image of infinite tenderness. This music seeks to evoke this image and then subject it to the vulgarities, horrors and capriciousness of “real life”. Travailed the vision eventually reshapes itself, albeit in subdued and humbled form, only to fade into time.

Music for Violin and Orchestra, Opus 12

The last sound heard is the solo violin’s floating high D, resolving at long last the eerie, barely perceptible major third (G-B) heard in the opening bars. In the final G major triad, a long-sought tranquility is found, the violin offering it’s high D to conclude the triptych as it was begun (the same D is the first note of the first panel, Music for Violoncello and Orchestra).

As in the preceding two compositions, the solo instrument is provided with a foil: for the violoncello, the accordion, for the solo flute, the tenor tuba, and here for the solo violin, the cembal d’amour. Hungarian gypsy fiddlers have traditionally interwoven the threads of their fancy into the sound-fabric of the Hungarian version of the cembal d’amour. Here too, sober and “classical” as this music is, the solo violin integrates with the cembal d’amour’s subtleties; even in the “solo” cadenza (where a Flexaton may be heard as well), sonorities occasionally weave through both instruments evoking thematic material taken from the body of the work.

Also, as in the preceding two compositions, the orchestra is a major player, at times mocking, at times seconding the solo violin’s efforts. Throughout, it is an equal partner, dreaming the solo violin’s dreams, scampering along with its tongue-in-cheek sallies, flowing with, and sometimes overwhelming, its many moods.

The work begins (Lento) in what seems like an uninhabited, bear space. The solo violin dreamily floats in from somewhere, its form, however, not without sinew. Exotic sounds hint a menace, crunching, growling, ominous chords (Pesante) spring from some orchestral grotto. Solo violin and orchestra do battle; staying on this course would be fatal to the violin. A change of tack: from it comes a shower of bubbly notes (Agitato). Dodging skillfully about, the solo instrument taunts the orchestral monster, bringing it to a bewildered halt. The violin then recounts a light-hearted tale (Comodo), soon sprayed back by the massed forces of the orchestra. (What an assembly! Even tuned bongos are thrown into the fray!) The hilarity turns ugly: the mass erupts, a tidal wave sweeps all away, sending the violin spinning towards a lonely place.

Undaunted (Cadenza) the solitary violin re-creates the world it knew, but now after its own fashion. Finally, a sinking wail of loneliness brings it to rest in – a rainforest? (Tranquillo).

Bird calls (played by the “flûte  coulisse”, used so enchantingly by Ravel in L’enfant et les sortilèges) wring forth from the solo violin a passionate theme of yearning, only to be mocked again. The solo instrument flutters slowly to a still place to sing a plaintive song (Tranquillo, Calmo, Triste) of … farewell(?).

Music for Violin and Orchestra was given its world premiere on November 10, 1997 with the composer as violin soloist, by the Deutsche Jugendphilharmonie conducted by Maestro Wolfgang Gieron. I have dedicated this composition to the person who inspired it, my wife Dietlinde.

Verbalizations seeking to “describe” or “explain” music can be treacherous, even from the composer – perhaps especially so if they come from the composer. The above was all written after the fact, for, as already mentioned, had I been given descriptive programs of this nature prior to composing these works, I would have winced, found it all depressingly specific, and would not have been able to write a note. Music is surely its own explanation. If I offer these comments (I presume to compose “from the heart”) it is in the wistful hope that they may in some way lead the first-time listener to an appropriate port to begin his journey.  – Lorin Maazel