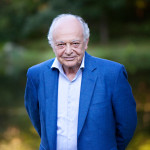 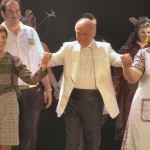 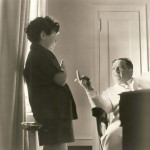 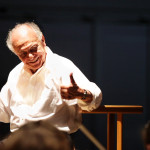 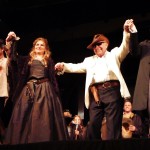 For over five decades, Lorin Maazel was one of the world’s most esteemed and sought-after conductors, with a career spanning 73 years of professional music-making. A second-generation American born in Paris, Lorin Maazel began violin lessons at age five, and conducting lessons at age seven with Vladimir Bakaleinikov. Maazel was invited by Arturo Toscanini to guest conduct the NBC Symphony Orchestra on the radio at age eleven. In a 2009 interview with The New York Times, he talked about the significance of being a young musician able to work with some of the greatest conductors: “I had these opportunities and am grateful to have had them.” In 1960, Maazel became the first American to conduct at the Bayreuth Festspielhaus. In the 1960s and 1970s, he served as Chief Conductor of the Deutsche Oper Berlin, the Radio-Symphonie-Orchester (RSO) Berlin, Music Director of the Cleveland Orchestra, and Music Director for the Orchestre national d’Île-de-France. In 1982, he was the first American to be named General Manager and Artistic Director at the Vienna State Opera. From 1984 to 1988, Maazel was the music consultant to the Pittsburgh Symphony Orchestra, and its Music Director from 1988 to 1996. From 1993 until 2002, he was Chief Conductor of the Bavarian Radio Symphony Orchestra in Munich. In 2002, Maazel became the Music Director of the New York Philharmonic, a position he held until 2009.

Maestro Maazel completed his seventh and final season as Music Director of the New York Philharmonic in 2009-10, and continued through 2011-12 as Music Director of the Palau de les Artes “Reina Sofia,” in Valencia, Spain. He became Music Director of the Munich Philharmonic in 2012 and pursued a broad range of international guest conducting activity, enjoying particularly close associations with the NY Philharmonic Orchestra, the London Philharmonia and the Vienna Philharmonic. Maestro Maazel was also a highly regarded composer, with a wide-ranging catalogue of works written primarily over the last 15 years of his life. His first opera, 1984, based on George Orwell’s literary masterpiece, had its world premiere at the Royal Opera House in Covent Garden, and enjoyed a sold-out revival at La Scala in Milan and at the Palau de les Arts in Valencia.

A Legacy of Mentorship

Alongside his prodigious performing activity, Maestro Maazel devoted much time to nurturing young artists as part of his strong belief in the value of sharing his experience with the next generation of musicians. In The New York Times, he talked about his goal with the Castleton Festival: “Apparently folks out there have been wondering for years when the time would come where a major conductor would sit back and say, ‘Now it’s time for me to tell all of you what this is really all about.’ ”

From the official inception of the Castleton Festival in 2009 until Maestro’s passing in 2014 he developed a unique brand of mentorship by inviting young outstanding talents into his home in rural Virginia. According to Dietlinde Turban Maazel, “he felt that there was no comparable “mentorship” program like Castleton that would be as comprehensive in addressing a wide spectrum of knowledge that he said was essential for a conductor: foreign languages and literature, philosophy, history, psychology, etc, in addition to the profound understanding of music. Sometimes he would say ‘conducting cannot be taught,’ but he was constantly searching for ways to ‘pass on the baton’ and pass on his ‘secrets’ that made him such a remarkable master.”

Frequently called the “last mentee of Maestro Maazel,” Castleton Festival Principal Conductor Rafael Payare gained prominence after winning the prestigious 2012 Malko Competition for Young Conductors under Maazel’s presidency. Immediately thereafter, Maazel took a personal interest, inviting him to conduct Mahler’s Fifth Symphony at the 2012 Castleton Festival. Of being named Principal Conductor, Payare has said, “It’s a great honor and I am very grateful to the Maazel family for giving me this opportunity. It is very important because Maestro Maazel invested a lot of his time and effort in this wonderful project. It is a unique opportunity to keep developing Maestro’s dream and make it reality. So I will do everything in my power to keep growing this and raising the bar to the highest artistic level possible.”

It was Maestro Maazel’s belief in a holistic education at the Festival that attracted Wynton Marsalis to collaborate with him again and bring the Summer Jazz Academy of Jazz at Lincoln Center to Castleton. When speaking about the decision to bring the Academy to Virginia, Marsalis said “We believe in a ‘hands-on’ approach to education and Maestro Maazel shared that belief… At Jazz at Lincoln Center we believe in a community-based education. At Castleton, a lot of the objectives are exactly the same as ours.”